We have an outstanding track record of success here. We have the resources and experience to handle the largest, most complex cases. Clients can be assured that we do not back down in the face of adversity.

John Eddie was inducted into the National Trial Lawyer Hall of Fame in 2018.

John Eddie is a proud Houstonian and Astros fan! 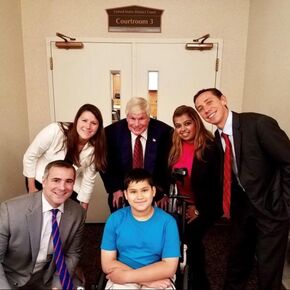 Founding partner John Eddie Williams, Jr. is a passionate, highly experienced legal expert and upstanding member of the community who consistently demonstrates an inherent duty to advocate for those in need through his ambition in the courtroom and the culture of his firm.

Hard work and tenacity are attributes that helped John Eddie achieve his success, and these are qualities that he has fostered within the team of attorneys and staff at Williams Hart since 1983. “We have an outstanding track record of success here. We have the resources and experience to handle the largest, most complex cases. Clients can be assured that we do not back down in the face of adversity. The tougher and bigger the opposition, the better for our firm; we get completely fired up for a good legal battle. Those are the type of employees we have assembled here, ones that are going to fight hard for our clients. We wouldn’t have it any other way.”

​John Eddie’s record of success has received substantial recognition, and rightfully so. By far his most significant win in the courtroom is the 1995 landmark battle against Big Tobacco in which he represented the State of Texas. That victory in this landmark case resulted in the largest settlement in United States history, reaching a total of $17.3 billion.

“Big Tobacco had a tremendous record in the courts winning 800 cases in a row! We were in a true David versus Goliath scenario, but the group worked extremely hard and knew what we were doing was the right thing to do. It was a complex case, the most complex. We had papers piled floor to ceiling, but we fought hard and we won.”

John Eddie’s fighting spirit began to thrive long before this historical win. A native Houstonian and son of working class parents, he was a standout football player at Pasadena High School and entered Baylor University on a football scholarship, graduating cum laude with a Bachelor’s Degree in Business in 1976. He then entered Baylor School of Law, serving as editor-in-chief of the Baylor Law Review and passing the Texas State Bar exam 15 days before graduating first in his class.
​
Decades later, he would make a significant contribution to the Baylor community by funding a new on-campus football stadium alongside the Brazos River, a construction that took its athletics organization to new heights. The field at Baylor Stadium was appropriately named John Eddie Williams Field.

From the football field to the courtroom, his commitment to advocate for others goes the distance. “To think that I could be an advocate for people and help them in situations where the law may be their only recourse was plenty of motivation for me. I find it the most rewarding.” John Eddie’s dedication to the community doesn’t stop at his alma mater. As the son and grandson of union longshoremen, he remains a strong advocate of workers and organized labor, representing members and their cases at every opportunity. “Workers are the backbone of our country and we work hard to help them in anyway we can.” John Eddie is certified by the Texas Board of Legal Specialization in personal injury trial law and was inducted into the National Trial Lawyer Hall of Fame in 2018.

He and his wife Sheridan feel strongly about helping the community in which they both live and were born. They are involved in many charities throughout the Houston area, donating both their time and money to organizations such as the Houston Chronicle’s Goodfellows Fund, which provides new toys for needy children ages 2 to 10 during the holiday season. In fact, they have donated the largest individual gift in local toy drive’s 97-year history two years in a row.

“Sheridan and I believe in giving back and hope we can inspire others to give what they can. Whether it is time or money we all have a responsibility to make our communities better.”
​
John Eddie’s sense of concern and compassion for others resonates in his advice to all his clients. “We want to help you the very best we can. Work with us, keep us informed of your situation and always listen to your medical professionals. We care about you not just as our client, but also as a member of the Williams Hart family.”

John Eddie is a strong advocate of workers and organized labor, representing members and their causes at every opportunity. He is specialized in representing plaintiffs in mass tort cases involving asbestos, silicosis, benzene, bad drugs, welding rod fumes, and toxic waste exposure. He represented the State of Texas in its lawsuit against the tobacco industry, resulting in the largest settlement in U.S. history..

All state and federal district courts in Texas